If you saw Apollo DAO’s recent post on “Wen Launch?”, you should have some idea of our plans for launch, but today we want to go into a little more detail on what exactly our Community Farming Event is, as well as how you can get involved.

When is the Apollo DAO Community Farming Event and how will it work?

The Apollo DAO Community Farming Event will launch on the 14th of September, with 3 million Apollo tokens (3% of the total supply) available to be farmed by our community before the Apollo token is released, at a fixed price of $0.25.

The way the Apollo DAO Community Farming Event will work is; our users will be able to deposit mAsset LP tokens, as well as other Terra Governance token LP pairs, including MIR/UST, ANC/UST and MINE/UST onto the Apollo Platform, with the rewards from these pairs being used to purchase Apollo tokens at the price of $0.25. This will work in a similar way to Orion’s Private Farming, however rather than utilising the 20% from Anchor rewards, our users will be able to make use of the yield from mAssets and Terra Governance Tokens to farm Apollo tokens. Our Community Farming Event will be open to all users in order to distribute the Apollo tokens widely amongst our community.

Why is Apollo DAO doing a Community Farming Event, rather than launching from a Terra Launch Pad?

Similar to Orion Money, Apollo DAO will be conducting our own Community Farming Event, as we believe this will provide a number of key advantages for Apollo DAO and our community:

This was possible due to the functionality we have built into our auto compounding platform and has aligned with our goals of enabling a wide distribution of tokens to the community, while also providing additional utility to other Terra project tokens. We also believe this will increase the attractiveness of partnering with Apollo, helping us to continue to integrate additional vaults as well as offer additional yield sources to Terra-based protocols.

This is just the beginning for Apollo DAO, with our auto compounding vaults forming the base of our plan to bootstrap the Apollo Warchest, which in turn will democratize access to opportunities (across first Terra, before venturing to other chains), by giving Apollo token holders to ability to manage and benefit from the deployment of the Warchest capital. For more information on the benefits of the Apollo Warchest, please see our tokenomics article.

Thank you to everyone for bearing with us for the last few weeks, it has been an extremely difficult time for everyone connected to the Terra ecosystem and a big setback for Apollo DAO. However, hard times create strong projects and as difficult as it may seem to “build back” 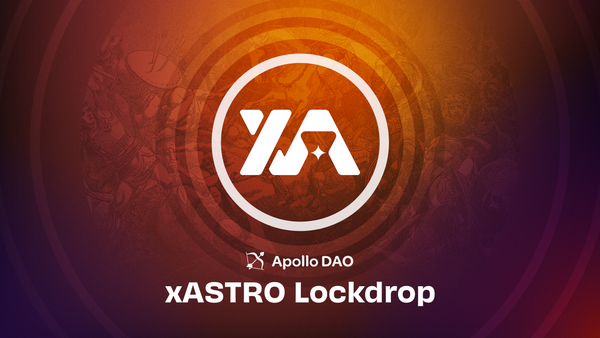 We recently released our post on how Apollo's Convex model will work, the benefits it will offer and how our primary focus will be on maintaining the apAstro (zxvAstro-xAstro LP) peg, while providing a high yield to users who stake Astro with Apollo. To kick off our Convex model, Apollo

With the recent release of xAstro and the imminent release of vxAstro there has been increasing discussion on the upcoming “Astro Wars” and the role the Apollo DAO will play. With a number of protocols also looking to start accumulating Astro, we thought this would be a great chance to