Liquid staking is one of the key derivatives every ecosystem needs and we are delighted our proposal to launch apOSMO has passed Osmosis Governance.

Thank you for all the support from OSMO holders!

But this is just Apollo’s first step in our Liquid Staking Journey, but none the less a significant Milestone for the relaunch of Apollo DAO.

Before we dive into Liquid Staking we would like to offer a huge thank you to Larry, who has be a great supporter of Apollo (and all round great guy) and was the original creator of the “STEAK” contract which Apollo have modified for Cosmos and have had fully audited.

Staking is the process of locking up a digital asset (ATOM, OSMO, INJ, etc.) to provide economic security for a public blockchain, in return earning you rewards from that Network.​​

While staking on Cosmos has proven to be extremely popular, with over 65% of all ATOM and 45% of all OSMO currently staked. However we believe that direct staking has a number of drawbacks that can be solved by liquid staking.

Traditionally when you stake on Cosmos with a validator, while you will be earning yield, you are then unable to further utilise these tokens and then when wishing to exit, they are then locked for between 2 to 3 weeks, when you will earn no yield.

What is Liquid Staking and what are the benefits?

The main idea of liquid staking is to improve capital efficiency, so you can earn greater rewards from the same capital, as well as greatly increasing your staking flexibility, by allowing you to exit anytime back to the non-staked asset.

The way liquid staking is able to accomplish this, is when you stake your tokens through a liquid staking provider, you will not only receive the ongoing staking yield, but you will also receive a liquid token to represent your staked balance. This liquid token can then be traded to the non staked version (though there may be slippage), or “slow burnt” back to the unstaked version over, taking 14 days for OSMO and 21 days for ATOM.

There will also be a number of Apollo specific benefits to our Liquid Staking Solution.

Using the example of Osmosis, the way that Apollo’s liquid staking solution will work is:

If you staked 100 OSMO with Apollo (at launch), you would receive 100 apOSMO - a tradable and transferable token to represent your staked balance.

At launch the benefits offered by apOSMO include:

apOSMO and other Liquid Staking Derivatives from Apollo should be viewed as building blocks, as due to the massively improved composability offered, they can offer a range of use cases and benefits, which we will continue to explore and develop.

Future benefits to apOSMO that we are currently working on:

No! While there will be a trading pool between apOSMO and OSMO, these assets are not pegged. We believe that any Liquid Staking Solution aiming to peg the LSD to the underlying asset are both wasting resources and removing a number of the benefits of Liquid Staking.

The way apOSMO will be valued is:

At the current OSMO yield of 25% APR, if the price of apOSMO (including compounded rewards) is >1% discount to OSMO, then users would be able to generate more yield by buying up apOSMO and slow burning it to OSMO over 14 days, compared to staking. While extreme market conditions may mean that apOSMO deviates beyond this, this provides a number of opportunities and benefits:

It is also very easy for users to avoid all this if they wish, as everyone will be able to slow burn their apOSMO over 14 days to receive the full underlying amount.

Why is Apollo introducing a Liquid Staking Solution?

The reasons we strongly believe that only one or two Liquid Staking Solutions would be detrimental to the Cosmos ecosystem is due the the huge amounts of benefits that Liquid Staking can provide and is therefore very likely to attract a large percentage of the staking marketcap of each chain it deploys to.

Without a number of robust and trusted solutions, a single provider can end up controlling a huge market share, reducing decentralisation and increasing a number of risks. While the situation is vastly different, we have seen this play out with Ethereum and Lido, who now control around 30% of the total staked ETH. While this is split across a variety of validators, the fact remains that Lido and in the future LDO holders have a huge amount of power, which greatly increases the potential risks to Ethereum. Also due to this huge market share and economies of scale, it makes it increasingly difficult for new Liquid Staking entrants, further centralising the Liquid Staking market on Eth.

Due to the far more mature nature of staking on Cosmos and variety of chains, we believe it is unlikely that we see something nearly so extreme, but at the same time we believe that it is important that ecosystems provide a variety of solutions, allowing users to choose the service that best fits their requirements and view point.

Due to Apollo’s experience with creating LP vaults and yield solutions, we believe we are uniquely positioned to release a highly effective staking solution that will provide a large amount of benefits, both to our users and the wider Cosmos ecosystem.

What chains will Apollo be releasing Liquid Staking?

Apollo will initially be releasing our Liquid Staking Solution to Osmosis, Injective and Terra 2, however this will quickly be followed by a range of other Cosmos chains, with more information to follow very soon.

The more Liquid Staking Derivatives we release, the more benefits will be brought to each chain.

The technical Information
Find the audit completed by SCV and our osmosis_steak_hub contract in this repo: [https://github.com/apollodao/steak-contracts/tree/dev/vault-token-abstraction](https://github.com/apollodao/steak-contracts/tree/dev/vault-token-abstraction). The checksum of osmosis_steak_hub.wasm is: a57131e078d6c7a230d9d9af45f96d44a90b554fafcc7b33e90902523ef76793 using rust-optimizer 12.6
This is a fork of @ larry steak contracts previously deployed on Terra Classic. 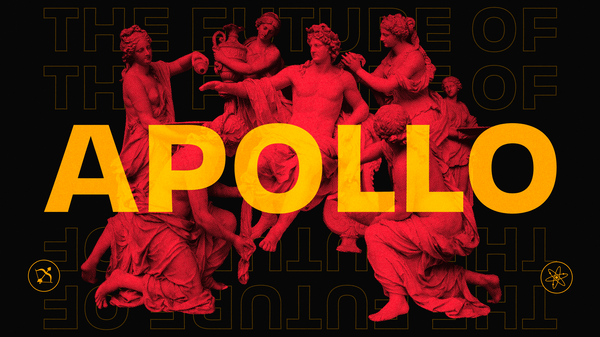 Apollo Safe is our multisig frontend for the CW3 contract, providing an easy to use multisig for Cosmos, initially launched on Terra and now coming to Osmosis and Injective for a governance vote. “A MultiSig wallet is a digital wallet that operates with multisignature addresses. This means that it requires